Stories from my Past: Do you live around here?

As a child I used to push a red wagon around the block picking up stuff I thought was interesting. One day I meet a new neighbor. 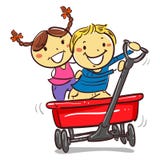 She said “Do you live around here?” and I said I did.

She invited me to her house to play and we became friends. Why am I sharing this with you? Becoming friends with someone can be easy, but we make things difficult in our lives.

For example, I read that most people on dating apps don’t reply to people they match with. Why? Isn’t the point to get off the dating app? It turns out that people feel good feeling desired, and that is more important than actually doing the hard work of having a real relationship.

It is funny isn’t it? People love to say there are no good men or women, yet that clearly isn’t true. What seems to be more common is that between laziness and intentional blockage they keep love from themselves.

I had a friend once who had such a long list of requirements for men to have, it will impossible to find someone like that. Men also have silly standards. Men often look for physical beauty, and women look often for resource providers. Both of those approaches are silly. A woman’s beauty can quickly go in a car accident, and a mans fortune can be lost easily as well. The wise person looks for something inside that can’t change like character and intelligence.

The girl that was my friend wasn’t beautiful or smart. I didn’t need those qualities to be friends with someone. I liked that she wanted to play and I wanted to play and that was enough. Why not accept people where they are now, and respect them instead of trying to use them to be something they aren’t?

I try to respect people where they are now, and it has gotten me lots of friends and lots of fun experiences. You miss out when you can’t accept others where they are.

LinkedIn Learning has improvedWhy listening to others is so important.