Stuff worth knowing about > Opinion > Ever had an all day interview?

Ever had an all day interview?

I have had two of them, and both times I didn’t get the position. 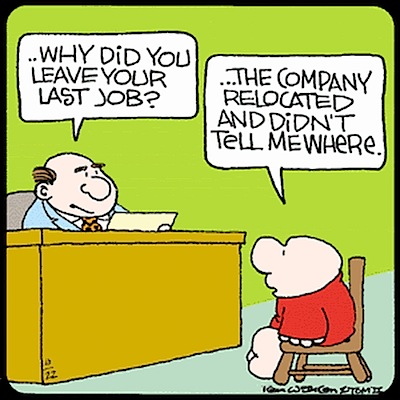 The first was with Google. They flew me out to California and interviewed me the entire day. I meet with multiple people, probably about 20 people in total. They feed me lunch and then asked me things that were not related to my job. For example, one person asked me how I would program a statement he requested. I asked if programming was part of the job, and it was not, he said he just wanted to see how I would solve the problem. I told him and he said it was a clever solution, but it wasn’t the way he would do it.

The second was with a company that feed me lunch and kept me there for 8 hours. I went in at 9 and left at 5. I interviewed with probably 40 people. I had meetings and meetings with groups of people, and then more meetings. I repeated myself 99% of the time, and it was exhausting. One person said that I had the skills to do the job, but if I didn’t get picked I should consider myself lucky. He said that the people here were very funny and were not easy to work with.

The third example I have is not all during one day, but one company interviewed me six times. Six times over video conferencing and in person. I had another job offer at the time, so I took it. They still said I had more interviews to do. I couldn’t believe it. I had already answered their questions 6 times. What was more times going to do? They said because they were international they couldn’t get everyones time to synchronize but did 50 people have to be part of the decision making process? To me, I was concerned with the process. Why?

Now I realize that if I company needs more than 3 times to decide if they want me to be an employee, I will remove myself from the process. I think companies that can’t decide, aren’t companies that I want to work for.

previousUS Citizens are dumb at math, vocabulary and technology
nextConnecting to a higher purpose