Stuff worth knowing about > Opinion > Don’t reverse the polarity with solar connections!

Growing up with Star Trek they often saved the day when they reversed the polarity. Don’t do this with solar connections. 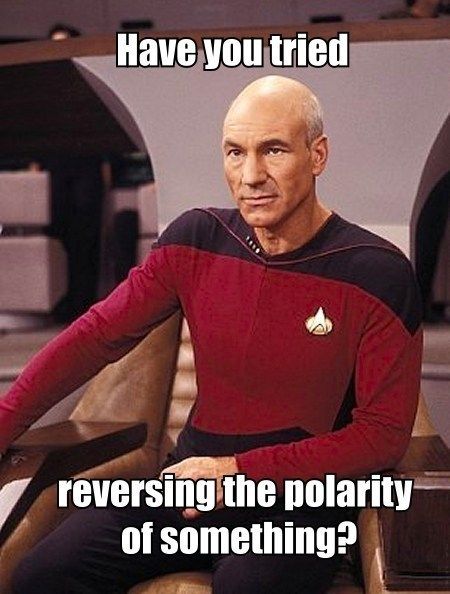 I bought an adapter for the Merlin solar panel I discussed yesterday. The adapter was perfect for the solar panel to MC4 connector. As I was about to connect my MC4 connector to my 5.5mm adapter, I noticed that the + and – weren’t the same on the plugs. It turns out that I had the wrong male/female adapters for MC4 so if I had plugged it in I might have ruined my solar panel or generator. I ordered another $15 cheap MC4 female to male adapter and it worked perfectly.

In the past I mentioned that one of my mistakes was in getting the wrong adapter type. Equally important is to make sure that the polarity is the same. If it says negative it should say negative all the way to the last adapter. If it says positive it should say positive all the way to the last adapter. Only one solar panel company doesn’t obey this called ZAMP and hopefully you read their instructions before setting it up.

If you do happen to reverse the polarity several things could happen. I know because all of these things happened to me in the past. As a child I loved to experiment with electrify so I had plenty of opportunities to learn. Generally it will spark or cause something to explode. Probably it would cause the solar generator port to explode and trip a fuse hopefully.

Solar power is still very safe. At 12 Volts this is just a little stronger than a 9Volt battery. Of course it can have several amps, but without getting too technical it is much much safer than 120 Volts of AC current. I don’t want to discourage anyone from using solar due to fears of getting shocked. I haven’t been shocked for a long time, but I got shocked many times with 120 Volts as a child and it didn’t hurt me. It wasn’t fun, but I didn’t make those mistakes again.

Now when I see shows that encourage people to be amateur electricians I don’t agree with that. I don’t think that anyone but a professional should be playing with AC current. The risk of death is too high. For sure, large solar projects can also be dangerous and need a licensed electrician, but this is not what I am talking about. I am talking about solar generators which are very safe and low voltages. If I had made a mistake, a fuse would have probably blown and I would have bought a new generator.

Making mistakes is ok if the risks to your health and safety are small.