Stuff worth knowing about > Opinion > Balance with material possessions

I have found it very helpful that when something comes into my life, something should go out as well. 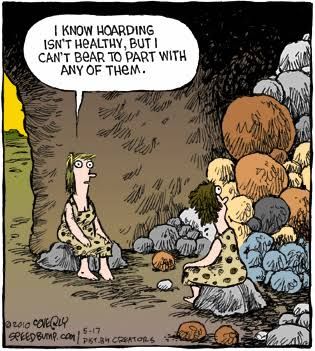 I have bought a few new summer short sleeve shirts. Since my closet only has so much space, I found a few pieces of clothing that I could donate. So I have donated those clothes which I no longer want to wear. It feels good that when you have things come into your life, you can also adjust and let go of things you no longer need.

Once I realized I had a few too many clothes I realized there were other things in my closet that I needed to let go as well. I had bought a briefcase for my laptop that I used to use. However since I haven’t used it in 2 years it was time to let that go as well. I donated that to a worthy cause as well.

This isn’t a humblebrag to brag about donating things. This is just to give an example that just like breathing you take something in, and you let something go. Having space and not feeling crowded by possessions is a great feeling.

I grew up around people who held onto things and were hoarders. They had so much junk in their homes and it was dusty and dirty as well. Even when it was clean, it was too much. I could never understand why they would want to try to maintain cleaning all of that junk. The older I get the less stuff I want.

Part of it is security. I understand why people would feel having things gives them a sense of security. However again my relative once lost everything in a fire, so it is a false sense of security. The best security is having a healthy body and an active mind, so that you can get a job and pay for things that you might need in the future.

Having things don’t make us happy, having experiences do.